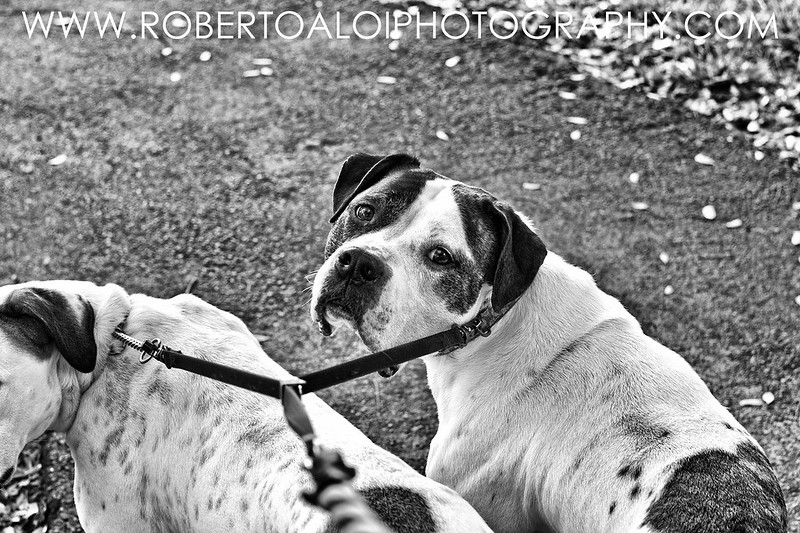 Kayla was clearly the head of the canine household prior to the introduction of Mia. Kayla threw societal tendencies and preconceived notions of male dominance out the window. She was the alpha no matter how many times Marley failed in his attempts to mount her and wined repeatedly about the pecking order that she firmly established. She lacks any trait whatsoever that would indicate subservience; it certainly isn’t running through her veins. She was always bigger, stronger, and meaner; albeit sweeter if you were on her good side. 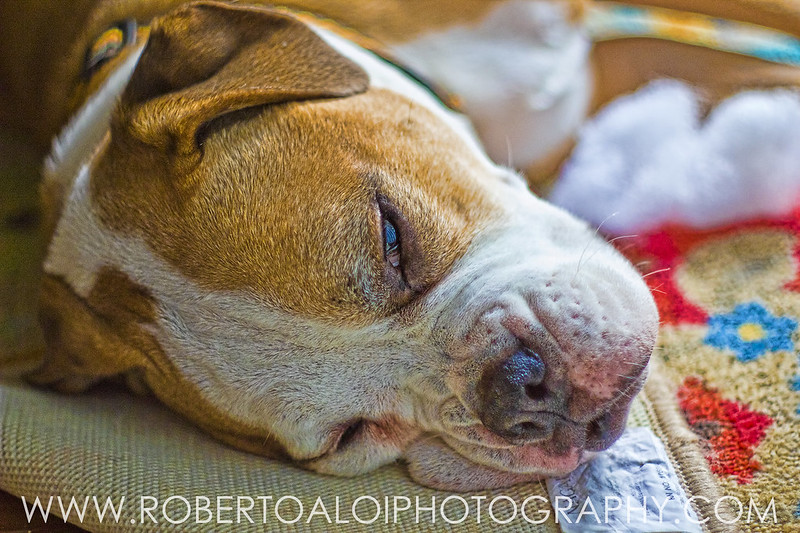 Then came Mia… Deanna had seen a couple different American bulldogs that were in need of loving homes. They were in differently places hours from south Florida. I had suggested we go to the local pound because we have dogs locally that need homes.

On the way into the facility we noticed individuals waltzing out and even happier dogs whose lives were potentially sparred from a death sentence. We entered the first of two large buildings that house the dogs. Keep in mind it’s towards the end of summer and the heat in south Florida is humid and downright staggering. Between the heat, lack of air conditioning, and smell emanating from the stalls of scared and sick animals it was borderline nauseating.

We slowly made our way past each dog. There were signs posted not to touch the animals, but we knew better. How can one not pet a dog? It’s even more of a challenge when they collectively give you their puppy eyes.

We noticed numerous that were cute and many that looked like they had very difficult lives. We went into the second building and it was a similar experience. I did my best to focus on breathing out of my mouth so I wasn’t fully enveloped in their condition.

We talked to an employee about the adoption process and she let us know her shift was ending. We heard her yelling at some of the dogs to pipe down. Not in a violent way, but when your mother tells you to be quiet. It was obvious she loved animals. She mentioned she had more than a dozen on a large piece of property. It was nice to know they were cared for by someone who had so many herself and truly loves and understands their personalities and concerns.

She escorted us over to Mia’s cell. We noticed a dog, but it was no American. There was another breed in front of us at that point in time. Each cell has an entrance on either end of its long rectangular shape and there is some kind of gate in the middle to create two separate halves if necessary. She explained the dog was very scared and injured. She was trying to escape out of her cell and jumped straight up and got her dew claw caught between the bars and either broke it or tore it completely off. That particular detail escapes me now.

She called her pre-adoption name a few times and we finally noticed her down the long corridor. She must have been all the way at the other end during our initial pass. When she faced us it was obvious she was an American bulldog. Scared, but she was definitely what Deanna had been looking for. We were told she was recently picked up and they give the rightful owner a certain length of time to claim her. She said knowing the area she was picked up the owners would not be back to pay the $400+ fees to take her home again.

How could someone mistreat me? Mia playing with a toy shortly after she was adopted 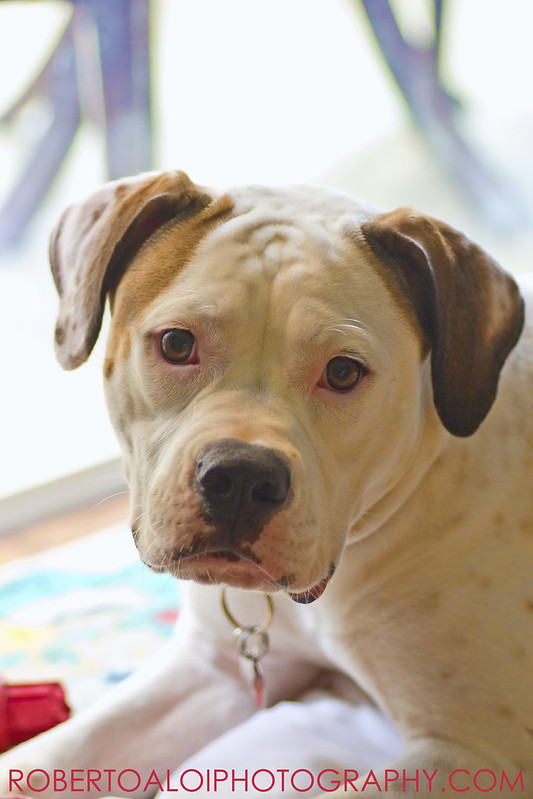 After speaking with the woman and starting the pre-adoption process we walked back over for another look. She was not responding to us and obviously frightened. I think I would be too if I were confined in an area like that. It was evident, aside from her current location, that her previous owners did not have her in the best conditions.

After repeated attempts I decided to do what Deanna normally despises. I pulled out the dog baby talk! Some background to be fair. Marley will start humping all humans in sight and Kayla gets excited and it just turns into a dog frenzy that often evolves into a fight. This time though it was welcomed. “HEY PRETTY GIRL!!” in my best falsetto. She slowly walked over and we stroked her sweet face. She walked away and almost seemed surprised she came to us. I did it again and she came over again and stayed a little longer to humor us.

The day arrived when it was finally time to rescue her from this dreadful place. She was scared to leave her cell. Maybe it was safer than her previous home? It took a little coercion to get her into Deanna’s car. I followed behind and our next fear was how she would react to Marley and Kayla or vice versa.

We were more cautious of Kayla because up to this point she was the alpha. She loves humans and is an amazing guard dog. God forbid you are a squirrel, dog, or human she doesn’t like and she lets out a very scary bark and can be ferocious.

The woman at the pound said she has had different doggy cellmates and was perfect with the animals, she just doesn’t seem too fond of humans.

One of us walked Mia by herself from a distance and another walked the other dogs. We just walked by and allowed Kayla and Marley to visually see her. They didn’t seem bothered. Why is my human walking this other dog?  Nope, didn’t seem to happen. They never skipped a beat. We repeated this process for what seemed like an eternity getting them closer and closer to Mia. Mia, at this point, would walk everywhere with her tale UP between her legs. Not just down, but somehow wrapped around underneath she was so absolutely frightened.

Eventually we had them all walking together and Mia was getting along great with Marley and Kayla. Well, not the other way around. Kayla was suspicious from the beginning. Marley I think sensed her puppy sensibilities and knew he finally had someone to play tug-o-war with because Kayla surely didn’t humor him anymore.

After a couple of months Mia now walks proudly outside. Her long tail seldom tucked. There are still times when the wind blows hard and she is scared, but it’s less frequent and she is getting better as the days pass. Deanna always wonders what she experienced that shaped her fear. I would rather never know the details.

Kayla mounts Mia on an almost daily basis, but Mia is not scared. I picture Kayla in this photo asking me why we had to get Mia?

The pecking order may soon change… 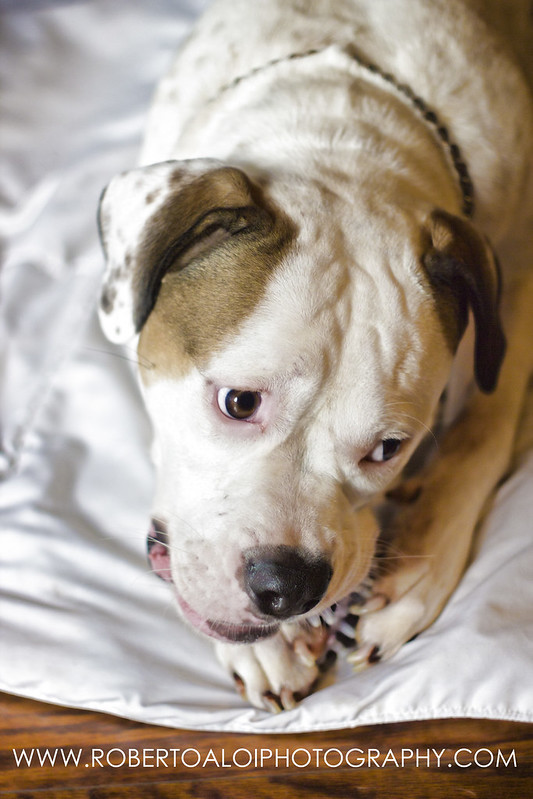